THIS EVENT IS SOLD OUT! Oscar Munoz, CEO, United Airlines

THIS EVENT IS SOLD OUT!

HOW COMPANIES CAN ADAPT TO TECHNOLOGY, INNOVATION, AND CONSUMER TRENDS

With the pace of innovation and technological change disrupting traditional industries, the commercial airline business finds itself at a crucial inflection point.  Having recently completed his first year as CEO of United Airlines, Mr. Munoz will reflect on the unique moment the airline industry faces, and outline his vision for how leaders in all industries can seize the opportunities presented by technology, innovation and emerging consumer trends.  Having served in key positions in a variety of important industries – from Coke and Pepsi to AT&T and CSX Corporation – Oscar will share his insights on how large companies can adapt to change, embrace innovation and remain agile in today’s ever-evolving business climate. 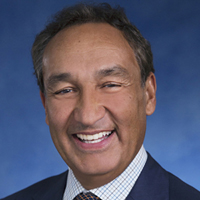 Oscar Munoz brings to this position deep and broad experience in both the transportation industry and large consumer brands.

Previously, Oscar served as president and chief operating officer of CSX Corporation, a premier freight transportation company. He also served as a director at CSX. During his tenure, CSX transformed itself into an industry leader in customer focus, reliability and financial performance. CSX was named one of Institutional Investor’s Most Honored Companies for a decade of excellent financial performance, including increasing its operating income by nearly 600%.

Oscar graduated from the University of Southern California with a B.S. in business administration, and he received an MBA from Pepperdine University. He has been named one of the “100 Most Influential Hispanics” by Hispanic Business magazine. He is married and has four children.

THIS EVENT IS SOLD OUT!

DUE TO SECURITY MEASURES, ADVANCE REGISTRATION REQUIRED, NO WALK-INS.
Reservations will be held at the door. You must have Photo ID upon entering the building for security purposes.

Sorry, this event is sold out.