Why Competition in the Politics Industry is Failing America:
Strategy for Reinvigorating Our Democracy 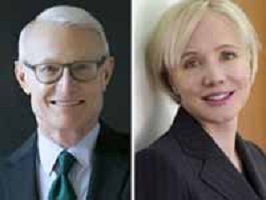 Katherine M. Gehl, former CEO and political innovation activist, and Harvard’s Michael E. Porter reveal how the U.S. political system is no longer designed to serve the public interest, and how it has been reconfigured over time to benefit our major political parties and their industry allies. Report lays out a strategy for reinvigorating our democracy.

About Katherine M. Gehl:
Katherine M. Gehl, a business leader and former CEO with experience in government, began, in the last decade, to participate actively in politics—first in traditional partisan politics. As she deepened her understanding of how politics actually worked—and didn’t work—for the public interest, she realized that even the best candidates and elected officials were severely limited in a dysfunctional system, and that the political system was the single greatest challenge facing our country. She turned her focus to political system reform and innovation and has made this her mission.

About Michael E. Porter:
Michael E. Porter, an expert on competition and strategy in industries and nations, encountered politics in trying to advise governments and advocate sensible and proven reforms. As co-chair of the multiyear, non-partisan U.S. Competitiveness Project at Harvard Business School over the past five years, it became clear to him that the political system was actually the major constraint in America’s inability to restore economic prosperity and address many of the other problems our nation faces. Working with Katherine to understand the root causes of the failure of political competition, and what to do about it, has become an obsession.

Want to save by becoming a Member? Click here to Join the Club!

CANCELLATION POLICY: All cancellations must be received by September 14th or the attendee who made the reservation may not receive a refund, regardless of participation, due to costs associated with the reservation.