Can men and women alike, finally have fulfilling careers along with the rewards of family life? Slaughter will present a powerful, persuasive, thought-provoking vision for how to finish the long struggle for equality between men & women, work & family. 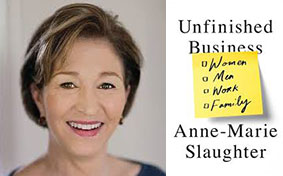 Discussion with Anne-Marie Slaughter
Unfinished Business
Women  Men  Work  Family
Monday, October 12, 2015
11:30 am to 1:30 pm
Union League of Chicago, 65 West Jackson Blvd
Click here to buy tickets!!!
As Wharton Alums, we want all!  Yet, we often find ourselves pondering, "Can we have it all?"
Join us for what should be a fascinating and provocative luncheon discussion with Anne-Marie Slaughter on her newest book, "Unfinished Business Women Men Work Family".
When Anne-Marie Slaughter accepted her dream job as the first female director of policy planning at the U.S. State Department in 2009, she was confident she could juggle the demands of her position in Washington, D.C., with the responsibilities of her family life in suburban New Jersey. Her husband and two young sons encouraged her to pursue the job; she had a tremendously supportive boss, Secretary of State Hillary Clinton; and she had been moving up on a high-profile career track since law school. But then life intervened. Parenting needs caused her to make a decision to leave the State Department and return to an academic career that gave her more time for her family.

The reactions to her choice to leave Washington because of her kids led her to question the feminist narrative she grew up with. Her subsequent article for The Atlantic, “Why Women Still Can’t Have It All,” created a firestorm, sparked intense national debate, and became one of the most-read pieces in the magazine’s history.

Since that time, Anne-Marie Slaughter has pushed forward, breaking free of her long-standing assumptions about work, life, and family. Though many solutions have been proposed for how women can continue to break the glass ceiling or rise above the “motherhood penalty,” women at the top and the bottom of the income scale are further and further apart.

Now, in her refreshing and forthright voice, Anne-Marie Slaughter returns with her vision for what true equality between men and women really means, and how we can get there. She uncovers the missing piece of the puzzle, presenting a new focus that can reunite the women’s movement and provide a common banner under which both men and women can advance and thrive.


With moving personal stories, individual action plans, and a broad outline for change, Anne-Marie Slaughter reveals a future in which all of us can finally finish the business of equality for women and men, work and family.
About the Author
Anne-Marie Slaugher is the current president and CEO of New America, a think tank and civic enterprise with offices in Washington and New York.  She is the Bert G. Kerstetter '66 University Professor Emerita of Politics and International Affairs at Princeton University and the former dean of its Woodrow Wilson School of Public and International Affairs.  Secretary of State Hillary Clinton appointed her as director of policy planning for the U.S. State Department from January 2009 until February 2011; she was the first woman to hold that job.  A foreign policy analyst, academic and public commentator, she has taught at the University of Chicago Law School and Harvard University Law School, and is a former president of the American Society of International Law.
Dr. Slaughter has written or edited six books, including A New World Order (2004) and The Idea That is America:  Keeping Faith with Our Values in a Dangerous World (2007), and over 100 scholarly articles.  She was the convener and academic co-chair with Professor John Ikneberry, of the Princeton Project on National Security, a multi-year research project aimed at developing a new, bipartisan national security strategy for the United States.  Foreign Policy magazine named her to their annual list of the Top 100 Global Thinkers in 2009, 2010, 2011 and 2012.  Dr. Slaughter received a B.A. from Princeton, a M.Phil and D.Phil in international relations from Oxford, where she was a Daniel M. Sachs Scholar, and a J.D. from Harvard.  She is married to Professor Andrew Moravcsik; they live in Princeton with their two sons.

Anne-Marie Slaughter's TED Talk "Can We Have It All?

BOOKS: Will be available for purchase and signing at this event.

FAQ:  Can I bring my associates, colleagues and staff to these events?  Yes, these events are great for networking, team building and training.  Wharton Alumni can purchase multiple tickets.  Club Members can purchase discounted tickets for their guests.

PARKING:  Valet parking ($29) is available at the Federal Street entrance.  Self parking is available at the garage on the northwest corner of Federal and Van Buren. Special rates are available for guests with tickets that are validated at the front desk. Union League Club Self Parking Rates - Weekdays, $25 all day.