Leadership is even more talked about as essential for business success. 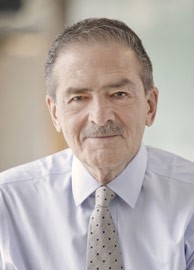 Professor Marvin Zonis joins us for a session on Leadership

Leadership is even more talked about as essential for business success. There are even more publications and even more ideas about what leadership is like and what it takes to be a leader. Based on his course at Booth, Professor Zonis will argue that leadership’s successful exercise depends on the passion and commitment of the leader and the emotional intelligence that a would be leader can use in interacting with would be followers.

The Dean asked, “. . . is there a Booth class that was particularly memorable?"

The CEO answered, "It was a class that I took with Professor Marvin Zonis on leadership.  He stressed that EQ trumps IQ in the long run - the E is for empathy.”

Professor Zonis will develop these ideas more fully and also relate them to the current US primary campaign.

Marvin Zonis is an Emeritus Professor at Booth where he taught courses on the International Political Economy, Political Risk, and Business Leadership. He was the first professor at the Business School to teach a course on the effects of digital technologies on global business. He was given the Norman Maclean Award in 2013 for outstanding contributions to teaching and to the student experience.

He also consults and gives speeches to corporations and professional asset management firms throughout the world on Leadership, as well as on Political Risk, helping them to identify, assess, and manage their risks in the changing global environment.

He is a member of the Board of Advisers for the Comptroller General of the United States at the GAO, the Board of Directors of CNA Financial, and a Fellow of PWC Advisory Services.

Zonis has spoken and written extensively on globalization, digital technologies, emerging markets, Middle Eastern politics, the oil industry, Russia, and U.S. foreign policy. He is an internationally acclaimed authority on the Middle East and has spent the last 55 years studying Islam and the Middle East. He is the former director of the Center for Middle Eastern Studies at the University of Chicago and former president of the American Institute of Iranian Studies.

His books include Risk Rules: How Local Politics Threaten the Global Economy, co-author (May 2011) ; The Kimchi Matters: Global Business and Local Politics in a Crisis Driven World, co-author; Majestic Failure: The Fall of the Shah; and The Political Elite of Iran.

This event is sponsored by the Chicago Booth Alumni Club.