Why do we go to Wharton? For many of us, the dream is to make high-level investing decisions for a fund or a large institution. Nick Thakore has been able to live that dream. He has been a top portfolio manager at Fidelity, American Express, Putnam, and now Diametric Capital. Nick is sharing his insights and lessons learned throughout his career both as a financial expert and entrepreneur in an open "Fireside Chat" discussion.

Join us for a very special, intimate small group discussion (limited to 12 participants) which is an exclusive access event only for Wharton Club of Chicago members. 3 spots remain available. 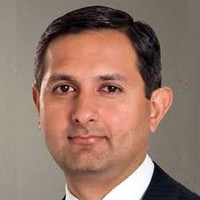 Based in Boston, Nick Thakore is the founder and CIO of Diametric Capital. Diametric Capital is an equity long/short, multi-manager fund company. With their differentiated structure, they target performance uncorrelated to the market and below-average volatility. Prior to Diametric Capital, Nick was Co-Head US Equities at Putnam Investments where he helped turn around Putnam. For instance, he led the lagging $5.1 billion Putnam Voyager Fund and made it the No. 1 fund in Lipper's large-cap growth category for three years. Nick got his first taste of the entrepreneur spirit when he and two other fellow Fidelity pros opened up an American Express office for AXP Funds (hedge funds) in Boston. Previously, he was the portfolio manager for the $12.5 billion Fidelity Fund that outperformed 71% of its competitors while at Fidelity Investments.

As an interesting side note, Nick got started in investing at around age 15, buying stocks using a small account his father set up. "My cousin and I were such nerds about it. We read Barron's magazine, and used to handwrite all these numbers down, and create trading systems. The first stock I bought was a (now-defunct) waste management company called Browning-Ferris Industries. I made money on it, and I thought it was really easy. Then I made a lot of mistakes. But the interest was there from an early age."

We hope you can take advantage of this unique opportunity while many of us are still virtual to chat with Nick Thakore.

Please be aware that these events are for Wharton Club of Chicago members only, limited to 12 attendees, and sell out very quickly.

If you are not a member, we would love to have you join or renew.