Civic Participation in the Era of Fake News 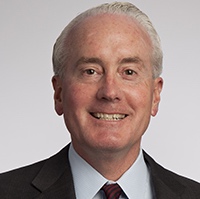 David Hiller is President and CEO of the Robert R. McCormick Foundation, one of the nation’s largest philanthropic foundations. The McCormick Foundation’s mission is to foster communities of educated, informed, and engaged citizens. Through grant-making programs and the gardens and museums at Cantigny Park, the Foundation helps strengthen families and communities in Chicagoland and Illinois.

Prior to Tribune, David was a partner with the Chicago law firm of Sidley & Austin. Before that, he served two years at the U. S. Department of Justice as Special Assistant to Attorney General William French Smith and as Associate Deputy Attorney General. During 1979 and 1980, Hiller was a law clerk to United States Court of Appeals Judge Malcolm Wilkey and Supreme Court Justice Potter Stewart.

A native of the Chicago area, David graduated from Maine Township High School, Harvard College, and Harvard Law School. He is an Eagle Scout.
Click here for more information about David Hiller