The Wharton Club of Chicago in conjunction with the Harvard Business School Club of Chicago invites you to enjoy a visit with Dan Levin, developer of Chicago's storied East Bank Club, as well as the Founder and Chairman of the Habitat Company.

Join us for a conversation at East Bank Club with Daniel Levin, founder of East Bank Club, a veritable Chicago institution recognized as the country's most gracious and dynamic fitness, sports and dining facility.  Mr. Levin will speak about his founding vision for EBC and its growth into the cornerstone of Chicago’s River North neighborhood today. 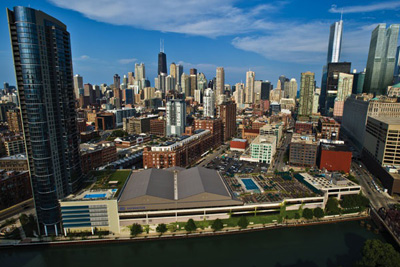 East Bank Club opened its doors on December 15, 1980 with 3,000 members and 100 employees. At that time, building an exercise, recreation and dining facility on such a grand scale was a new concept. Today, East Bank Club has more than 10,000 members and 600 employees. Unparalleled in size, scope and range of services, the 450,000 square-foot East Bank Club has set the standard for first-class hospitality and excellence in the fitness industry. And with its state-of-the-art equipment, astounding range of amenities and superior member relations, East Bank Club serves as a prototype for the creation and continuation of health clubs worldwide.

East Bank Club has attracted some famous Chicagoans over the years. President Barack Obama was a member of East Bank Club before taking office in Washington, DC. Oprah Winfrey is a member, as is Chicago Mayor Rahm Emanuel. Wholly committed to exceeding member expectations, it is no surprise East Bank Club has one of the highest member retention rates in the industry.

A real estate developer since 1957, Daniel Levin also is the founder and chairman of The Habitat Co. He has directed the financing and structuring of more than 20,000 rental and condominium units in 80 locations and six states. The company has more than $2 billion in assets under management.